A new refining process developed by the Nofima research institute now enables mackerel fillet producers to manufacture a high-quality oil from the residual raw material. This is how value creation and sustainability can go hand in hand.

The project is funded by FHF (the Norwegian Seafood Research Fund) and has been carried out at Nofima with Senior Scientist John-Erik Haugen as the project manager.

Mackerel is a pelagic species of fish that has a high fat content and is rich in the essential polyunsaturated omega-3 fatty acids EPA and DHA. In the industrial production of mackerel fillets, the residual raw material has been used to make animal feed. This is due to the fact that no solutions have been established to extract and refine the oil.

However, tasteless and odourless mackerel oil is well suited for use in health foods and functional foods due to its high content of healthy fatty acids.

Improved utilisation of the whole fish

The project is a well-defined innovation project that will provide actors with significant values within the mackerel industry, as well as contribute to more sustainable food production. Currently, oil is not extracted from the residual raw material of mackerel, but the industry and scientists have long been aware of the potential that lies within the fish.

The project has consisted of developing a profitable process that produces a neutral oil from the residual raw material.

“The project has had two sub-goals. The first has been about developing a neutrally tasting oil so that it is suitable for human consumption, either in functional food or as an additive in other food products. The second part involves giving the industry an opportunity regarding added value, as well as increasing the sustainability aspect in terms of greater utilisation of the fish for human consumption”, says John-Erik Haugen.

“During the project, we have allowed Nofima’s sensory panel to test the oil to ensure that the final result is what we have been aiming for, namely a completely odourless and tasteless product.”

The process includes several stages of purification, but the scientists still believe that it will be profitable for the industry to utilise the residual raw material. Mackerel oil is not on the market today, so it will be something completely new that also has a well-documented health effect.

“Primarily, actors that handle large volumes of mackerel fillets will want to use the technology. It is also this part of the industry that has requested a solution, since the amount of residual raw material is increasing due to an ever decreasing proportion being exported as frozen whole fish. Mackerel is a healthy food and I am confident about the combination of sustainability and value creation, so it will be exciting to see who first takes advantage of the technology in their operations”. says Haugen. 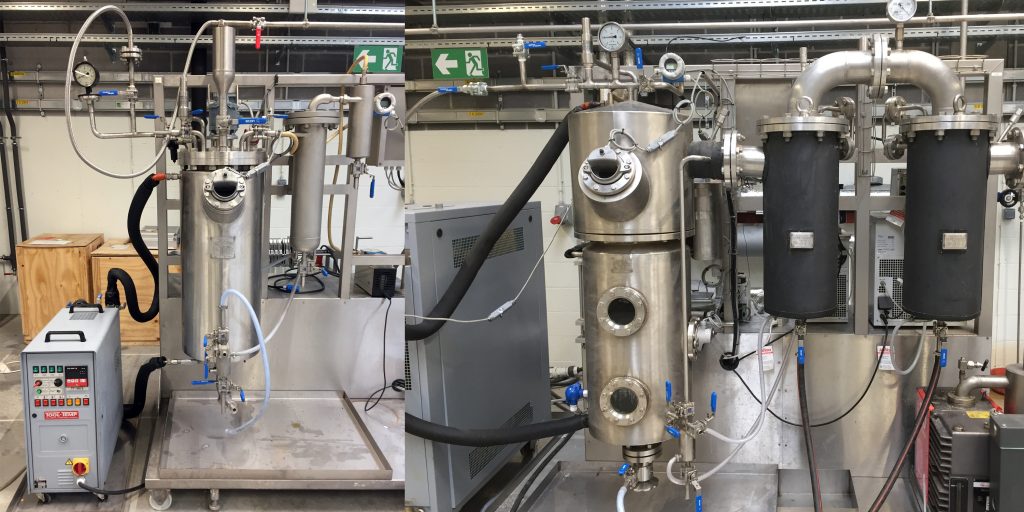 How the crude oil is refined

“In order to produce the desired final product, the crude oil must undergo a number of purification stages (refining) consisting of bleaching, winterisation and deodorisation.

Deodorisation is required to remove odours and flavours, and to achieve a neutral taste. Finally, antioxidants must be added to the refined oil in order to stabilise it. This is to avoid rancidity occurring during storage and to increase the shelf life of the oil”, says Haugen.

Bleaching – This process removes pigments, rancid elements and trace metals. Fuller’s earth (a fine-grained clay mineral) is added to the oil during heating. The unwanted substances bind to the Fuller’s earth which is then removed by filtration.

Winterisation – Mackerel oil has a high proportion of saturated fat (stearin) that solidifies at refrigerator temperatures.

Winterisation consists of a slow cooling process in which the fraction of stearin solidifies and is removed through a filtration process. Saturated fat gives the oil a high melting point, and removing the stearin results in a liquid oil at low temperatures.

Deodorisation – This process is carried out by sending water vapor through the oil at high temperature and low pressure. This stage breaks down and removes residues of oxidation products and volatile compounds that can cause unwanted odours and taste. In addition, the process removes organic pollutants.

Stabilisation – To avoid rancidity and increase shelf life during storage, antioxidants must be added to marine oils. Natural antioxidants such as tocopherols (vitamin E) and rosemary extract are commonly used.

“We have developed and tested a pilot-scale refining process which means that the industry can now utilise this knowledge commercially. We believe that the results from this project will have a high utility value for the mackerel industry. Everything is now in place to utilise the residual raw material from mackerel in order to make high-quality oil”, concludes Haugen.