The FISHWELL handbooks are a collaboration between fish welfare researchers and veterinarians at the food research institute Nofima, the Institute of Marine Research (IMR), the Norwegian Veterinary Institute (NVI), Nord University (all of whom are based in Norway) and the University of Stirling in the UK. The trout handbook is 310 pages long and can be downloaded for free from Nofima’s website.

“Atlantic salmon and rainbow trout dominate farm animal production in Norway and are key aquaculture species in many other countries. There is increasing interest in their health and welfare from a wide range of stakeholders including those working within aquaculture, the R&D community and society in general” says Lars Helge Stien, a Senior Scientist at the Institute of Marine Research.

“Our aims when we started the project were to review and evaluate the range of differing existing and emerging welfare indicators for assessing the welfare of farmed salmon and trout. We then assembled welfare indicator toolboxes for the wide range of production systems and operations that the fish are subjected to.” says Chris Noble, a Senior Scientist at Nofima who led the project.

“Whilst there are many similarities between Atlantic salmon and rainbow trout in terms of their welfare needs, there are also many differences in, for example, their responses and behaviour that needed to be addressed in each book” says Associate Professor Martin Iversen at Nord University, Norway.

“Part A gives an overview of what we know about fish welfare, outlines what we know about the welfare needs of each species, and conditions that may affect the fulfilment of these needs. As the requirements for the fulfilment of needs may vary through life, we have specified the needs for different life stages, where this is suitable” says Jonatan Nilsson, a Scientist at Institute of Marine Research in Norway.

“We tried to make Part B very practical and user friendly. Farmers are often very busy, and we wanted them to get a detailed yet effective overview of relevant welfare indicators for their differing production systems.” says Jelena Kolarevic, a scientist at Nofima.

“Handling a group of fish often requires a set of sub-operations or routines. The WI toolboxes in Part C are set up to give you some guidelines on how and why they should be used. For example, if you plan to perform a mechanical de-licing operation, you should look at the section on mechanical and thermal de-licing in the new technology part of the handbook in addition to sections on feed withdrawal, crowding, pumping and the examination of live fish. This is to ensure the welfare of the fish are monitored in every step of the de-licing process” says Kristine Gismervik, veterinarian and scientist at the Norwegian Veterinary Institute, Norway. 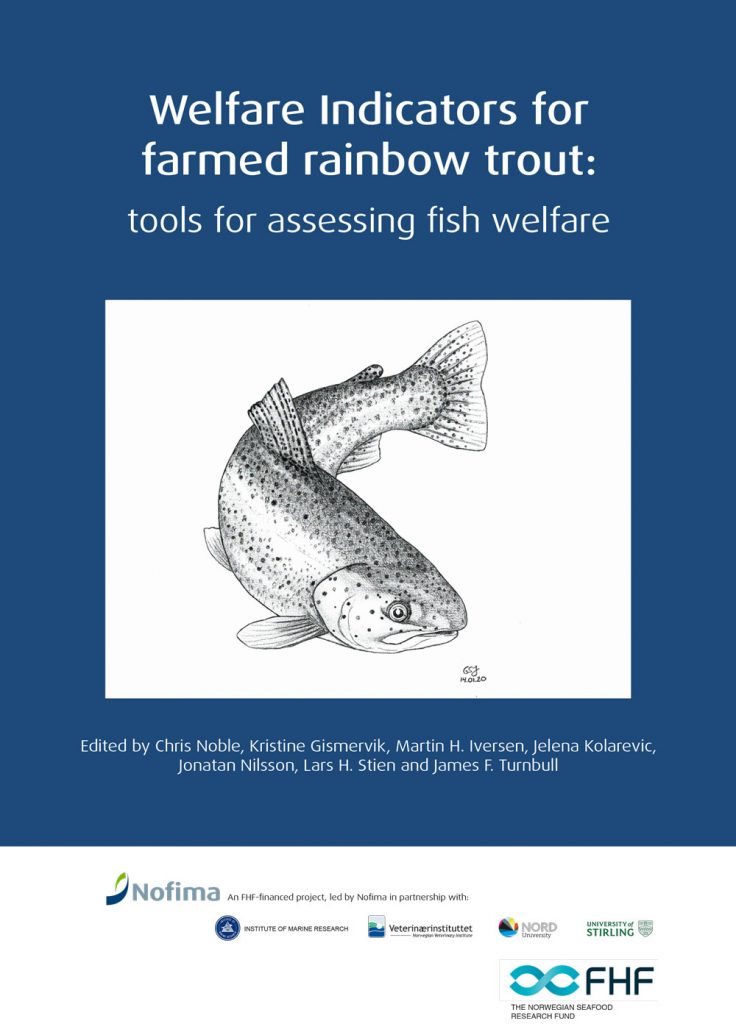 Click here to download it. It is not yet decided whether the new handbooks will be available as hardcopies.

“Many researchers have worked on farmed fish welfare over the last 3 decades, but this is the first time all of that information has been brought together in an accessible form for farmers, regulators and other stakeholders” says Professor Jimmy F. Turnbull at the University of Stirling, UK.

The two handbooks are the outputs of the research project “FISHWELL: Kunnskapssammenstilling om fiskevelferd for laks og regnbueørret i oppdrett”, which was funded by the Norwegian Seafood Research Fund (FHF).